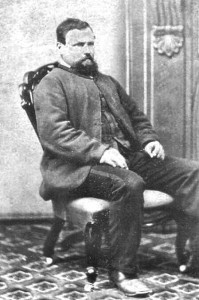 BARTOLOMEO (BART) STURNIThe name Sturni is a dialect form of the Swiss word Storni whose literal meaning is “starlings.”
Bartolomeo (Bart) Sturni arrived in Western Australia in 1858 aboard the ship Winefred.” He was one of the many hundreds of Swiss people who came to Australia around this time, many of whom came with the express purpose of making their fortune on the goldfields and then returning home.
An older brother Pietro (Born circa 1827) made the journey with the young Bart who was about sixteen at the time. Their parents were John and Mary (nee Galliciotti). Also traveling on the ship with them were Giovanni Domenico Galliciotti and Pietro Galliciotti—probably their cousins. All four said they came from Contra, now part of an area known as Tenero-Contra.
The Tenero-Contra area is located some 5 kilometres east of the city of Locarno and is probably a suburb these days, although maps show Contra and Tenero being a small distance apart.
When Bart was living there it is likely that the area was a little rural village. It is in the Ticino Canton just over the border from Italy.
A Canton is an area with distinct political rights similar to an Australian State. Canton Ticino consists of the upper Ticino River basin and is the only Canton where Italian is the main language, and we know that this was Bart’s mother tongue.
Contra and Tenero are located on the narrow stretch of rich river flats where the Ticino river empties into the northern end of Lake Maggiore. 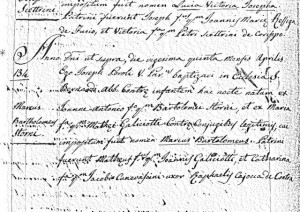 Family legend maintains that Bart’s father had remarried after the death of Mary, and Bart and his new step mother did not see eye to eye. John thought it best to get Bart out of the household, and gave him his fare to come to Australia.
On the 18th. of June 1875, some seventeen years after his arrival, Bart married Amelia Thorp, the daughter of Edmund Stephen Thorp and Isabella Halley (nee Black), at the Congregational Church Maryborough. Both were living at Adelaide Lead, a few miles out of Maryborough, where Bart was a wood splitter and charcoal burner.
Amelia had been born at German Gully, Fryers Creek (near Castlemaine) the family having settled at Adelaide Lead after a couple of moves within the State after their arrival from Van Dieman’s Land. Amelia’s English father was a shoemaker—a trade he had learned whilst in prison—her mother a Scottish country servant. Both were convicts transported originally to Van Dieman’s Land, who had been given their Freedom Certificates.
Bart and Amelia later moved to Nuggetty, an area near Waanyarra between Tarnagulla and Laanecoorie, where they began farming and raised their nine surviving children. Third child John had died in 1883 prior to their move. Their eldest daughter Mary Elizabeth married Edward Morton, a son of Michael Morton and Elizabeth Hawkins. 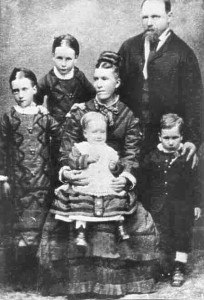 STURNI FAMILY GROUP
(L to R) Mary Elizabeth, Isabella, Amelia holding Angelina, Bart & John It is my understanding that whilst the older children were christened as Catholics, some of the younger ones were not. The alleged reason for this makes a humourous story.
Apparently Bart became seriously ill and it was thought prudent to have the local priest attend to confer the last rites.
When however the priest demanded what Bart considered an outrageous fee for this service, he was given his marching orders. Bart recovered so well that he sired more children, all of whom were christened Presbyterian.
Another version of this story is that the priest refused to travel to Nuggetty because it happened to be raining very heavily, and that this was the reason for Bart’s disillusionment.
After a protracted period of illness with heart disease, Bart died in November 1904 and is buried in the Tarnagulla cemetery.
Amelia survived Bart by twenty six years during which time she twice married again—first in 1908 with Frederick De Heid, a French pastry cook, and after his death, again in 1913 with William Biggons.
Notwithstanding these two marriages Amelia was buried in the Tarnagulla plot with Bart, as his wife.

By Mrs. Angela Rodoni
Great Grandaughter of Bart and Amelia
“On 19th February, 1858 Bartholomeo Sturni emigrated to Australia from the Port of Liverpool, U.K. on the S. S. Winefred. The Winefred, carrying 140 statute adults under the Shipmaster, Alexander Graham, arrived in the Colony of Victoria on 2nd June, 1858. Bartholomeo, aged 16, was listed as a farmer in the Winefred’s log book.

“Few made fortunes from the fickle whipstick gold and with the growth of quartz mining, as a group they (Swiss immigrants) turned increasingly to charcoal burning and timber-getting for the miners”. (Cusack ( 1 ))

At the time of his marriage in 1875 Bartholomew’s profession was that of a splitter. Dr. Gentilli stated that woodcutters and splitters and burners of charcoal could earn a little more than unskilled labourers, and a few who could buy horses set up business as timber or carting contractors. Their main problems were ignorance of language and the lack of capital. (Gentilli (2))
On 18th June, 1875 Bartholomeo Sturni married Amelia Thorp. Their marriage was celebrated by Minister William Allen in the Congregational Church in Adelaide Lead, Maryborough. Amelia was the fourth of seven children born to Edmund Stephen Thorp and Isabella (nee Black).
Amelia’s parents had come to Van Dieman’s Land courtesy of His Majesty’s Court system during the late 1830’s and early 1840’s respectively.
Amelia bore Bartholomeo ten children throughout their 29 years of marriage. Apparently the elder Sturni children were christened Catholics. The younger children in a direct defiance of a financial request taking precedence over a spiritual anointing when Bartholomeo lay on his death bed, were baptised into the Presbyterian faith.
Sarah, born at Waanyarra on Christmas Day, 1891 was the youngest child born to Amelia and Bartholomeo. Like her siblings, Sarah received her formal education in spasmodic bursts at the local school in Waanyarra until approximately twelve years of age. After the death of her beloved father in November, 1904 Sarah’s career, called “Going to Service” saw her move finally to the home of Mr. & Mrs. Hugh Gallagher. While Sarah worked for Mrs. Gallagher, she renewed her Catholic faith and met the “boy next door” Hugh Fitzpatrick. Hugh was the second youngest of thirteen children born to prominent Bradford/Maldon citizen Henry Fitzpatrick and his wife Mary (nee Clancy).
In May, 1916 Sarah and Hugh were married at St. Brigid’s RC Church, Maldon. 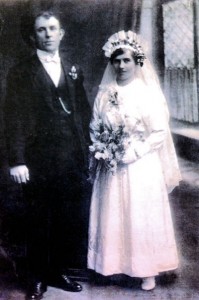 Hugh and Sarah on their Wedding day 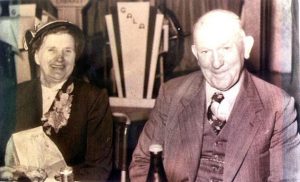 During their 45 years of marriage they had nine children. It was not until 1930 when Hugh purchased a 1926 “Dodge” for £130, to replace Sarah’s faithful “Zulu and Buggy” that their family could travel together.
Apart from attending church, the Easter Procession and St Patrick’s Sports Day were the two social events on the calendar eagerly awaited by such large families typical of the Waanyarra, Shelbourne and Bradford district.
“Paddies Day” held at the local reserve clearing included such events as sheaf tossing, wood chopping, horse events, and were renowned for country-baked afternoon teas to be had for a bargain price. As the big day in March drew near one of Sarah’s sons, Joseph, remembers tacking posters on any and every available tree or post and marvelling at all that Paddies Day had to offer a youngster of the Depression era. He recalls witnessing twice the spectacular horsemanship displayed by Mrs. Murrell (later of ‘Garryowen’ fame). Local men, many of whom kept their wives pregnant or kitchen-tied, credited her with being equal to the best male riders of the district. A rare admission in such a male dominated society.
The climax of this family social gathering was the St. Patrick’s Day Handicap. Neighbouring farmers were anxious to race their prized hacks for the coveted Cup Day Trophy. In the early 1930’s Hugh and Sarah’s horse ’Slim Jim’, with jockey Walter Charles in the saddle, won this cup.
The trophy that year was a substantial purse of approximately £5. To this, Sarah added fifteen shillings and bought a fashionable silver coffee pot from a Maldon jeweller. This pot is now an heirloom to stay in the family of the eldest Fitzpatrick grandson.
Sarah, known as Sadie by Hugh, survived her husband by twenty-two years dying in August, 1983, aged 91 years. Although she missed seeing her first great-grandchild by four weeks, she is survived by her nine children and the legacy is further enhanced by 37 grandchildren and their succeeding new generation.
Life at the turn of the twentieth century was simple, a far cry from today’s sophisticated technology, and could be summed up by the philosophy “a fair day’s pay for a fair day’s work”. Just as the outbreak of World War 2 was to signal the end of Paddies Sports Day, a way of life for the man and his family on the land was also fading into the past.”

“My great grandparents were the Ohrt and Sturni families. The Ohrts arrived at Waanyarra in 1904. They were Johanna and Emest and their four children, Mary 11, Vera 9, Hugh 7 and Phyllis 4.
Mary and Vera married the two Sturni brothers, Peter and Andrew. Hugh fought in the First World War and received two medals. In the 1920’s he died in Melbourne from injuries received during the war.

HUGH OHRT’S MEDAL
Inscription “Presented to Pte H. Ohrt from his Waanyarra friends on his return from the war – 1917”

Mary married Peter Sturni in 1911. They had four children who were all born near Waanyarra. They were Doris, Victor, Iris and William. Mary and Peter left Waanyarra after their two sons, William and Victor joined the army to go to the Second World War. Some of their possessions sold at their clearing sale are listed below:-

Vera married Andrew Sturni in 1914 and they had seven children, Alan, Violet, Doreen, John, Joan, Harold and Hugh.
Peter and Mary were married for 63 years and Vera and Andrew were married for 52 years. Both couples are buried near each other in the Tarnagulla cemetery.
The Ohrt family lived near the Waanyarra 1879 school. The grandchildren would have a nice hot lunch at their grandparent’s home nearly every day. Today only the chimney of the house remains as evidence that there was a house there.
Hugh never married. He used to have a motorbike and when he came home on leave he’d give all his nieces and nephews rides on it.
Phyllis was born in 1900. She married twice, first to Tom Smith who died in 1929, then to “Doc” Dermody.
My great grandparents, Amelia and Bartholomew Sturni, lived at Waanyarra for several years. They arrived there about 1890.
Bartholomew died in 1904 and Amelia in 1930 at Dunolly. They are buried together at Tarnagulla.
Emest and Johanna Ohrt are buried at Dunolly, they were married for 42 years.”