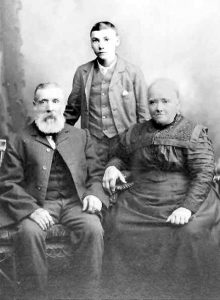 SIMON and ANNIE (“GRANNY”) STRAHAN (nee Bright)
(Famous Waanyarra Midwife)
and WILLIAM SKUTHORPESimon Strahan, with his three half brothers, went gold digging in California from Dublin, but were not successful and came to Australia. On their ship coming to Australia was a Mr. Boan whom Simon taught to write and read. They went to Waanyarra where Mr. Boan opened up the ‘White Swan Hotel’. When the diggings started to peter out Mr. Boan took his family to Perth. There he opened a store which later became a large department store under the name of ‘Boans Limited’.
Simon Strahan and Annie Bright from Greenwich, England married and became small farmers at Waanyarra.
Edward and Septimus Strahan became Doctors and practiced in Lygon Street, Carlton and Moonee Ponds respectively, Dick became a Schoolteacher in Bendigo, Frank Strahan was Secretary to the Prime Minister at one time and Archibald was Secretary to the Lands Department of Victoria.
Frances Strahan’s sister Ann, married Lance Skuthorpe, a great horseman and well known rough rider throughout Australia. Jack Pollard wrote Skuthorpe’s biography titled “The Rough Rider”. Skuthorpe’s sons were also great horsemen.
Lance Skuthorpe and Ann Strahan had two sons, William and Wallace. Lance and Ann divorced when the boys were quite young. Ann’s sister-in-law, Annie Strahan took the boys and brought them up at Waanyarra. When the boys were older they joined their mother who had remarried in Western Australia. William served in the First World War.
In the Longreach Stockman’s Hall of Fame there is a sculpture of ‘Dick Skuthorpe 1883-1980’ also a portrait of Lance Skuthorpe with the following caption:-

“A legend in the golden age of horsemanship – a crowd of 100,000 turned up in Sydney to witness the rough riding hero ride the outlaw buckjumper, Bobs, to a standstill in one of the most celebrated rides in history. Ten years earlier when he jumped the perilous ““Gordon’s” Gap Leap’ at Mt. Gambier his name was placed forever on the list of Australia’s greatest horsemen”.
Lance Skuthorpe Jnr., a son from his second marriage, was also a great horseman, known to have represented Australia overseas.”

Posted under Families of Waanyarra and tagged with Boan, Bright, Pollard, Skuthorpe
Comments (12)