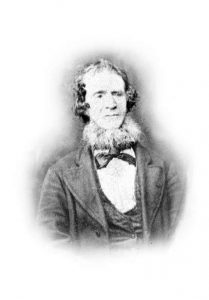 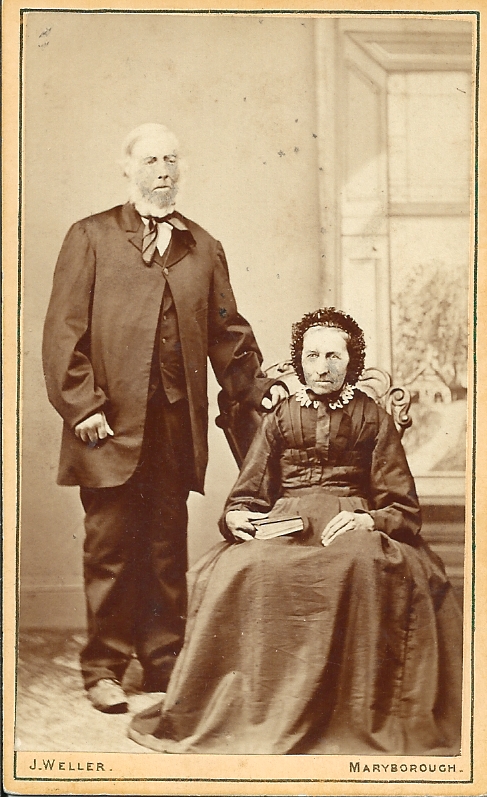 By Nell Silke and Freda Scholes
“Nicholas Gallienne of French descent, and his second wife, Rachel lived on the Island of Guernsey in the English Channel. They set sail from England bound for Australia on the 9th December, 1849, on the ship Trafalgar, which left from the port of Plymouth. The family arrived in Port Adelaide on the 11th April, 1850.
Nicholas’ daughter Marie, and six children from his marriage to Rachel travelled with them. (One of their daughters, Harriet later married Robert Scholes).
In 1854 Nicholas and Rachel bought a horse and dray and travelled overland to Victoria, in search of gold. Rheola was the area they first began their gold search, but soon followed the ‘rush’ to Jones’ Creek.

The family settled at Jones’ Creek and took up land which remains in the family to this day.
Harriet Gallienne married Robert Scholes and lived at Waanyarra. After the death of Harriet’s brother, Frederick, Harriet and Robert moved into the homestead and raised their family there.
Their first child was George Nicholas, born in 1872, then Rachel 1874, followed by Edmund in 1878.
Edmund’s three sons, Edmund, Robert and George carried on working the original property in partnership as ‘Scholes Brothers’, until Robert retired and went with his wife Mavis, to live in Maryborough. Edmund Jnr.’s youngest son lan, took over his father’s share and bought Robert’s land. George still lives on the original property and with his wife Freda works the farm. 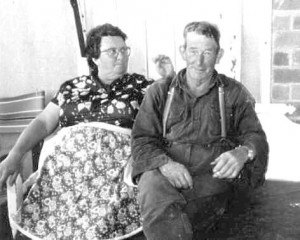 Rachel Scholes married William Jones and lived at Waanyarra. They had four children, Emma May, William Robert, Arthur Harold and Edmund.
Arthur (Icksey) remained on the Jones property all his life, he never married, and died at Dunolly on the 19th July, 1976. 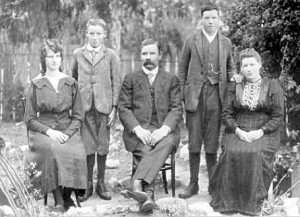 JONES FAMILY
Emma, Arthur (Icksey),William, William Jnr., Rachel (nee Scholes)George Nicholas Scholes married Edith Jane Lockett. They had three daughters, Ivy, Edith Louisa and Rachel, also three boys and one girl who all died young.
George Allan Scholes was born at Dunolly in 1924. He has lived all his life on the original family property at Waanyarra first selected by Nicholas and Frederick Gallienne in the 1860’s. George’s father, Edmund, passed away on the 23rd September, 1955, aged 78, and Sara (nee Freemantle) George’s mother, passed away at the age of 93, on the 14th August 1973. George married Freda McKenzie in 1947 and had three sons, Stewart, Maxwell and Trevor.”

How Things Have ChangedBy Freda Scholes (nee McKenzie)
“Mail was delivered two days a week and the only telephone was at the Post Office, which was in a private house. The postmistress would ride her bike to give anyone a phone message. Electricity did not come through to Waanyarra until 1966. We had no refrigerator until we got one run on kerosene.
The butcher and baker called twice a week. The grocer came every two weeks, took our order and brought our goods the following day. The grocer took our eggs and we paid for our groceries once a year with the price of the eggs deducted from the account. The tradesmen we dealt with came from Dunolly.
There were no washing machines as such (except the old wooden hand operated one of Grandma’s). We boiled the clothes up in the wood-fired copper and scrubbed the clothes clean on the scrubbing board. A battery wireless was listened to sparingly as we had to go to get the batteries charged up in Tarnagulla or Dunolly.
We played a lot of cards and games with the children before bed time. 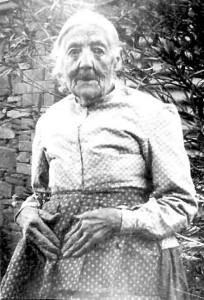 Lucrece (Lucretia) Gallienne (born 29th May, 1841) – cared for some of the family of her deceased sister, Sophia after her untimely death in l871. Eventually, Lucretia, at the age of 45 years married her late sister’s husband, Peter Pallot. She survived only some ten months, dying on 6th January, 1887.

“An inquest was held on Christmas Day by the District Coroner, G. Cook, Esquire, on the body of a woman named Sophia Pallot. From evidence of the witnesses examined, it appeared that on Saturday night the deceased was seized with pains of child-birth, and, in the absence of her mother, who generally attended her, she was attended by a neighbour named Arm Adams, who delivered the deceased of twins. The mother of the deceased arrived shortly afterwards, and everything in their power was done for the sufferer.
Meanwhile, the husband was sent for the Doctor, but before he could arrive, the woman was dead. Dr. Green said that he had been sent for about ten o’clock on Saturday night, but on arrival the woman had died. He made a postmortem examination and gave it as his opinion that the deceased had come by death by the retention of the placenta, and, had medical aid been present at the time, it could have been removed.
A verdict in accordance with the medical evidence was given.
The deceased, together with her husband, were a hard working couple and had raised twelve children in the most destitute circumstances. Already the public of Tarnagulla, notwithstanding so many calls of late upon their charitable feelings, are making arrangements to assist the bereaved parent in his misery.
Contributions will be received by Messrs. Thomson and Comrie.”