“There were fifteen children in our family, all but one was born at Waanyarra.
Thomas Charles was born at Murphy’s Creek, but soon after came to Waanyarra.
We were very much a Waanyarra family, ten boys and five girls, the children of
John Pearce and his wife Caroline (nee Biggs). 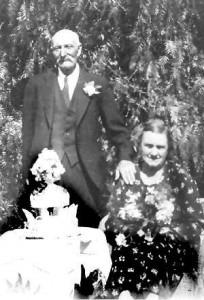 John Pearce & Caroline (nee Biggs)
50th Wedding Anniversary 1939At least six of the boys and four girls from our family attended school at Waanyarra, the older ones finishing school there. I was the youngest so did not go to school until we left the area. Although there was always talk of school I only remember my brothers and sisters talking about the usual fights and name calling which was common at schools. When my brother Clarence started school at Waanyara the school teacher called him ‘Pomp’. The name stuck throughout his life and few people knew his real name.
The young people soon learned how to find gold as my father was experienced at mining. At one time he found a 100 oz. nugget, and at another time found the same amount but in small pieces over a very small area.
Other work done by my father was wood carting, sleeper cutting and forest thinning. My father, while working on the forest thinning gang, cut his leg. It was not a bad injury but it became infected and he was in hospital recovering for several months. These were hard times with no compensation.”
My mother went to work doing a mail delivery by horse and buggy. My brother William left school to work in the Poverty mine in Tarnagulla, to earn money to help the family – he was 13.
Food did not seem to be a great problem although it was of a plain kind with most of it coming from our own garden. We’d have fish, some game and sometimes goat meat. I can just remember my sisters gathering cranberries and geebungs in the bush.
My family selected land in the Mallee as gold was getting scarce at Waanyarra and there were few jobs for school leavers. The Mallee seemed a good place for a family to work together.
Charlie (Thomas Charles) married Victoria May Atherton from Dunolly. He left the Mallee for Rushworth in 1916 where he lived until his death in June, 1988 aged 98. He was the oldest man in Rushworth at the time. His wife predeceased him aged 92.
Jesse Pearce was my father’s brother, there was also another two brothers in the family, James who went to Melbourne and Charlie who worked on the railways. Charlie later selected land on the east side of ours in the Mallee. Jarrys were to the north of us so we still had our friends and relatives around us.
Torpey brothers from Waanyarra also settled in the Mallee area after they had tried their luck on the Waanyarra gold.”

“My great grandmother’s name was Page.
I do not know her Christian names (Thought to be Ann.(Ed.))
She came from Cornwall.
She married a Pearce. (Charles R. (Ed.))
Their son, Jesse Pearce married Matilda Louisa Cogswell in 1892 at Waanyarra and had eight children. 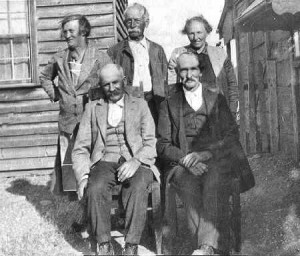 My father, John Robert Pearce was born on the 20th February, 1900. My mother, Florence Amelia Kick was born at Dunolly on the 6th September 1901; there were seven children in her family.
My parents married it Sea Lake on the 14th July, 1920. Father worked as a forest officer at Tarnagulla and Waanyarra. Their first three children were born at Dunolly; Nigel, Loris and Royden. When the children were only very young my parents journeyed to Gunbower Island, Koondrook by horse and cart. There they lived in tents at the iron punt and then moved down the river further, still living in tents, until the Victorian Forestry Commission built them a house on Gunbower Island.
While on Gunbower Island, twelve more children were born, seven girls and five boys; Noel, June, Dulcie, Dawn, John (died 1934), Ross, Nesta, Heather, Audrey, Cedric, Bruce (died 1976) and Lynette.
Father worked for 32 years as a Forest Officer and took pride in his work.
My father was a great lover of horses, he used a horse and gig to get around to brand timber for sleeper-cutters. He always kept his horses well groomed and in fine condition. His drays, gigs and harness were things of joy to see. He also did a lot of blacksmith work in the area. People from many miles away brought their horses to be shod, he also made the shoes himself.
My father worked in the forests until February, 1959. He died of cancer on the 12th September, 1959. My mother passed away on the 8th April, 1973, aged 72. In the family there are 71 grandchildren and about 220 great grandchildren.”

James Pearce’s Family
Edna Evans (nee Pearce)
Jesse Pearce, my grandfather married Matilda Louise Cogswell at Waanyarra.
Their son James was my father. He married Mary (Pink) Morton, daughter of Ted and Mary Morton (nee Stumi).
Their children were myself (Edna), Jesse and Ronald.
My father loved animals. He tended many sick animals and was like a ‘Vet’ in the Waanyarra area.
He also did a lot of blacksmithing work in Waanyarra. His bellows, which once belonged to the Cogswell family, were still working and were in use at the Beaufort Steam Rally in 1988. Dad ran cattle and later sheep on his farm.
My mother ‘Pink’ made soap, using ‘Borax’, and glycerine for softness. She polished the floors of our house using separated milk. There were no refrigerators of course and she would get up at four in the morning to pat up the butter in butter moulds before the day became too hot.
In the 1930’s surprise parties were a favourite entertainment along with’magic chairs’, and also we played a lot of cards. 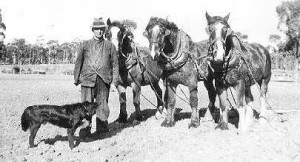 Jim Pearce
With Prince, Nugget and Laddie and Nigger the dog 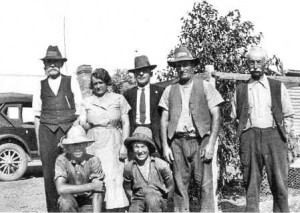 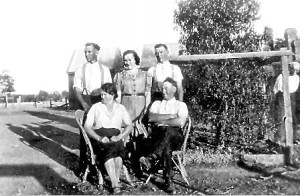 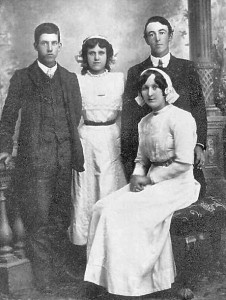