JAMES LOCKETT
Some Memories I Have Of My Grandfather, James Lockett
By Nellie Grant
“When James Lockett’s mother died the young James went to sea. At an overseas port he met this older brother who told him to ‘Get Back Home’, but James disobeyed and kept on with his life at sea.
One of his jobs on the ship was to light the Captain’s pipe at the stokehole or kitchen and take it to the Captain at the wheel.
James went Whaling in ‘Newfundland’(sic). The crew used to sight the whales, and when in the area jump from iceberg to iceberg, holding a spear up high, thrust it into the whale and head back to the ship. Back on board the men were filled up with rum, and the whale was then hauled on board.
Once James missed his footing on an iceberg and went down a crack between the ice. By holding his spear across the top he saved his own life.
On his return from one voyage his sister told him his elder brother was in Australia. James decided then that he would work on a ship bound for Australia. By chance, James met his brother in the street in an Australian port so he then worked on the ship back to England and on arrival, booked for work on a ship going back to Australia. This time it was a one way trip, destination Melbourne.
Early after his arrival in Australia, James was at Geelong but soon travelled to the goldfields namely Waanyarra.
At Waanyarra he planted grape vines and brewed wine, he also had cows and a milk round. His room in his house was at the front of the dwelling and his boys lived in a building at the back of the house. James had a cowbell hooked on a wire from their room to his so he could call them each morning without much bother to himself.
In his old age James took a boat trip to Sydney, but it was “ a land lubber run”, he said.
He then went to live in Tarnagulla with Alf and Birdie (Bertha and Alfred Reilly).
Cribbage and his vegetable garden were James’great interests then. When Alf and Birdie went to the Mallee in about 1919, James went to stay with Mary who lived nearby.
My great delight was listening to Grandfather’s cylindrical recordings on his gramophone. I remember well that he loved his game of Crib. And although washing day was a Monday, rain or shine, he asked Eliza, “What about a game of Crib?”. She said, “Get the one up top”, which was her sister Elizabeth Ann. So the washing was interrupted and the card game was set up. “Only one game”, the girls said.
I can remember Elizabeth Ann was always called by both names.

GRANDFATHER LOCKETT
Well there he is, sitting in the garden, filling his pipe as he rests. An upright man, tall broad shouldered, fading brown beard and bright blue eyes. He has cleaned his garden tools and put them away. The children are sitting at his feet.
A gentle, easy going grandfather, kind and proud of his children and grandchildren. How they enjoy his stories of life at sea and of other lands, and still an occasional Cornish word, showing the place of his birth.
He hasn’t lit his pipe yet, I think I know the reason, we will see. “Cup of tea Grandad”, he has heard the first call and is on his way to the kitchen door.
“Thank you, thank you, the sun told me it was round about tea time, and then you called me. What about some music or a game of Crib this evening?” 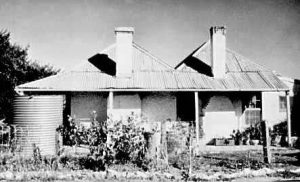 “I can’t remember much about Waanyarra, as I left there when I was about 13 to work for Mr. Johnson, a farmer at Eastville. I worked there nearly six years.
My mother was Mary Elizabeth Lockett, born at Waanyarra, the eldest daughter of James Lockett Snr. My mother went to a privately run school which used to be where Stumi’s place is along the Nuggetty Road.
Gibbs ran the school. There were three brothers, and one of them was a school teacher. When I was in Dunolly Hospital with a badly fractured leg in 1909, that was the year the Laanecoorie Weir broke, I met up with Bill Gibbs. I would go down and have a yarn with him. He told me he was the first person to hatch out chickens without a hen.
The school teachers I had at Waanyarra were Miss Fyfe and Miss Slattery was the sewing mistress. Miss Fyfe did not stay long, she was replaced by Mr. George Clark. He would go to Morton’s pub at lunch time and drink, then come back to school half drunk.
There was a rivalry between the East and West of Waanyarra. We used to have some tremendous cow-dung fights, we were nearly enemies.
I left school when I was 12.
There were lots of miners and wood cutters in the area then, and about 65 kids attended the school.
The creek nearly always had fish in the deep waterholes which became silted up through the mining. We would often catch blackfish or redfin in the creek.
I only saw two Aborigines in the time I was at Waanyarra, there was never much evidence of them being there.
I used to help Grandfather Lockett make wine. He sold it for sixpence a bottle and Port was ninepence. Grandfather also had a milk round to Tamagulla for 35 years, he’d take the wine in and sell it when he delivered the milk, 1 think he had a permit to sell wine.
I went to the Mallee in about 1910 and cleared many acres of land with a large Mallee roller and a team of horses. The Mallee was booming then. I went shares with my Uncles Dick and Alf in land. The blocks were 750 acres in area.
We had ten bullocks in our team, they all had names, Cockie and Snaily were two of them. This was at Ouyen. To get the bullocks into harness you’d pick up the whip and call the two leaders in, then the next two would follow and so on, then you’d yoke them up. They were wonderful patient animals.
We cleared land in the Carwarp area for 4/- an acre. We put in a crop for somebody and generally worked around. They were hard times and we had very little money. For a time we just lived on rice and very little else.
I went to the War in 1916 and was in the 38th Batallion serving overseas.
I married Mabel Victoria Ingwersen in 1923, we had four children, Jack, Kevin, Joyce and Ron.
Last year my driving licence was renewed until 1993. I will be 102 when I have to front next. I don’t drive anymore, I’ve always been a pretty impatient driver, but I get a good laugh out of the driver’s licence.” 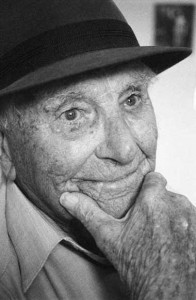 A Century of Memories 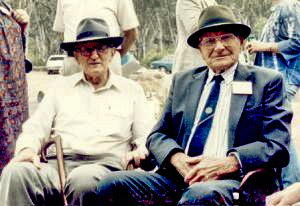 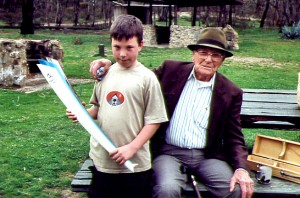