Chinese people on the goldfields

CHINESE ON THE GOLDFIELDS 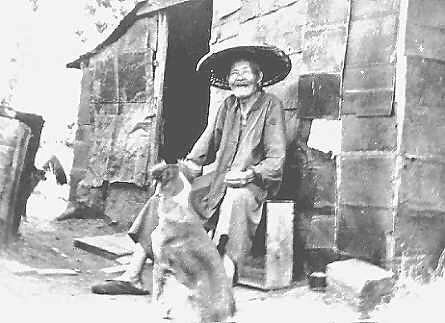 CHINESE MAN ON GOLDFIELDS NEAR WAANYARRA
Note the use of flattened out kerosene tins on the walls.
By early 1857 things had quietened down at the Jones’ Creek diggings. But there was still the steady stream of “locals” and Chinese working the gullies, some having large finds.
The Chinese were well aware of the richness of the Jones’ Creek alluvial field and left the Sandy Creek (Tarnagulla) diggings during the week of the big finds at Jones’ Creek.

The Maryborough and Dunolly Advertiser, on 15 th September, 1857 reported:-
“After their (the Chinese) departure, the remains of the camp were set fire to, partly we presume to purify the locality from the filth and dirt which are an integral part of Chinese encampments and partly to leave no inducements for fresh hordes of wandering Mongolians to favour Sandy Creek with their presence”.

Racial undercurrents were strong during the gold rush period although there was a reasonable racial tolerance by the British immigrants toward the non-British immigrants.
There was no question that Australia at that time was following the British way of life. British customs and British law prevailed. Other nationalities mined together and there was a sense of harmony among the different groups until anti Chinese feelings arose. In many places there were riots and murders. Some stories which have been handed down, tell of Chinese being murdered and dumped down diggers” holes and nothing being done to detect the culprits. Mine holes at Jones’ Creek are said to hide many Chinese miners murdered this way.
Non Chinese regarded Chinese customs and language with a great amount of suspicion. Antagonism developed and disputes arose. The non Chinese were alarmed at the large number of Chinese on the diggings and feared they would be over-run. Most non Chinese were ignorant of the Chinese way of life, they saw their livelihood threatened by people who were prepared to work over the tailings and those areas abandoned by other diggers.
Generally, the Chinese worked in large groups and kept to themselves. They were painstaking and hard working and as a result were very often successful. Hostilities arose because diggers saw the Chinese as depriving them of wealth and opportunities, especially the chance to go back over the old diggings. Others saw the Chinese as decadent and a threat to the morals of the white female population. But this was just another ploy to discredit the Chinese as morals were being threatened by the white diggers daily.
The total population of Chinese on the diggings is unclear as many walked across land from South Australia. The 1861 Census Returns recorded 24,732 – being 24,724 males and 8 females.
Burnt Creek(Bromley) was the site of a large settlement of Chinese, who had many notable gold finds. The settlement became an integral part of the Dunolly area and boasted a Joss House. It was reported that a Chinese named Ah Hing walked there from Waanyarra to worship regularly.
Wong Ying, a Chinese youth from Canton came to Dunolly to work for his uncle in a grocery shop. Wong Ying’s work and diligence allowed him to purchase the Terminus Hotelin Dunolly. It is said that he once had a mine at Waanyarra. There is documentary proof that he sent gold back to China at one time and he made a visit to his home country, where he married. Alone, he arrived back in Australia and married a European woman.
The Ying family ran the Terminus Hotel until 1956, when it closed. Wong Ying was a respected and successful member of the Dunolly community.
His grand-daughter, who lives at Waanyarra, says that his money was made by hard work and tenacity rather than luck.

Information of any involvement of Chinese people in the Waanyarra area would be welcome.

Posted under Gold,History and tagged with Gold
Comments (0)