Some photos of the fence restoration work done by “The Families and Friends of Waanyarra” and information signage installed. 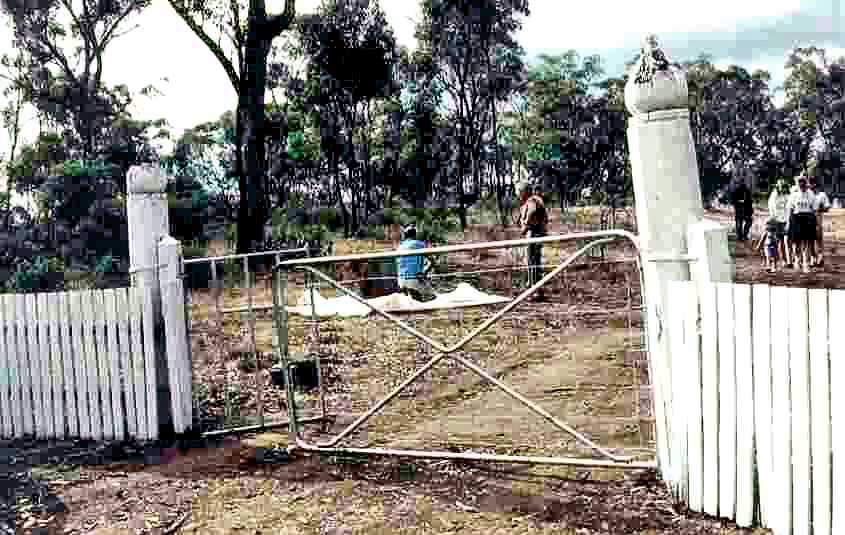 The builders of the post and rail front fence

This sign was one of the first projects completed by the Families and Friends of Waanyarra.
It was made by photo engraving the text and images into the surface of a sheet of stainless steel—the etched areas then being paint filled.
In addition to the text the sign shows an impression of the gravesite of Jesse Turner, the operator of a “Shanty” during the heady days of gold fever in the Waanyarra area, and a depiction of the Double Wax Flower (Eriostemon Verrucosus) also known as the Fairy Wax Flower.
The Wax Flower occurred extensively in the Waanyarra area in days gone by, but is now unable to be found. This may be because many plants were dug up in an attempt to move them into home gardens or to provide stock for plant propogaters, thoughtless harvesting of the flowers and possible changes in climatic conditions.

“The first rush to this area occurred in 1853 and brought with it deaths from mining accidents, illness and disease.
The oldest surviving marked grave in this historic cemetery is that of John Gibson Brown, who died on October 10th. 1859. The recorded history of this rich gold-mining region indicates however, that many burials must have taken place prior to this date.
Initially the cemetery was situated to the south of this site, but seasonal flooding of Jones’ Creek resulted in it being moved to higher ground. When Phillip Chauncey surved this area in 1861 a reserve for a cemetery had been marked out on the north side of the Dunolly to Tarnagulla road, west of this site, but it was not favoured by local residents and was never used.
Chauncey officially named the area Waanyarra during his survey, replacing the name “Beverly” chosen by Governor Latrobe. “Beverly” was used only by a few of the early goldseekers, and was quickly forgotten. This eastern section of the Waanyarra area, and the creek running through it, became known as Jones’ Creek, after Charles Jones, an early prospector.
Before the introduction of wooden coffins it was usual to enclose a body between two sheets of bark for burial. Local identity Mr. Cheetham is credited with making the first wooden coffin used here. It was made for the burial of a child.
In April 1871, a public meeting was held at Morton’s “Welcome Inn” where the first Trustees for the various sections of this cemetery were elected.
They were:-

These people organised the burials and kept the cemetery in good condition for many years. It was totally funded by public subscriptions, but as time passed the population of the area declined, money dried up and public interest in maintaining the cemetery waned. This made the task of the Trustees very difficult and they resigned their positions. A new team of Trustees unsuccesssfully attempted to rekindle community support and the cemetery closed officially in 1891.
Despite its official closure, local families continued to use the cemetery for many years without permission, preferring to be buried in family graves in the district in which they had lived for most of their lives.
As far as can be ascertained, Mrs Beborah Chapple (nee Corrie) is the only person to have gained official permission to be buried here since its official closure.Debbie, as she was affecionately known, had been a tireless worker for the maintenance of this cemetery.
The Shire of Bet Bet became the Trustee of the Waanyarra cemetery in 1965 and receives annual grants for its maintenance.
Since 1988 an informal group, The Families and Friends of Waanyarra, has dedicated itself to maintaining the historic significance of the area. A bronze plaque recording the names of those buried here without a marker was placed here by the group who have also cooperated with the Tarnagulla Recreation Parks Committee, the Bet Bet Shire and its Development and Tourism Committee in the erection of this signboard and the renewal of the front fence and gates”.

Posted under The Historic Cemetery
Comments (2)

2 Responses to Fence Restoration and Signage