We mentioned earlier that Michael had an older brother John who had been transported for life to Van Dieman’s Land in 1845, two years before Michael. John, and accomplice Patrick Brien had attempted to assassinate a wealthy landlord, Mr. Theophilus Roe. Roe was on his way to a fair at Templemore when John discharged a blunderbuss (a crude type of muzzle loading shotgun that could fire multiple round balls of lead) at him, succeeding only in putting a “ball”through the victim’s top hat.

Today in Ireland members of the Morton families who are descendants of Thomas tell stories of the “Great Uncles” who were transported to Australia long ago, and are very quick to relate the legend which is supposed to be an additional reason for John being transported for life.

It seems that John was caught singing rebel songs outside the British garrison stationed nearby, and that one song “The Peeler and the Goat” (which was particularly contemptuous and derogative of the sexual behaviour of the British) stirred the “Poms” up no end and they decided to use this defiant behavior as a further excuse to get rid of him.

We have recently been told by an elderly Irish lady who is a decendent of Rody Morton (whom we believe to be a half brother to Michael and John) that Michael was singing protest songs, and songs of the plight of Ireland under the tyrannical rule of the British, as he was standing on the station platform in Nenagh waiting to be transported to gaol.
“PEELERS” was the name given to police—after John Peel, an early organiser of the English police force.

The convict record of John shows that his father was Thomas and that he had brothers Thomas, Michael and Edward and sisters Eliza and Mary. His mother’s name was not given unfortunately. John came to Victoria and married Mary Doyle in 1862. His marriage and death certificates give his father’s name as Thomas as we would expect, but his mother’s name is given as Catherine Madden. John named his children in the same order as Michael—first daughter Catherine, second Mary and third Elizabeth, first son Thomas, second John.

Hopefully at some time in the future we will be able to find out the truth about the mother’s name. One of the other strange things is that Michael and John do not appear to have made contact even though they were both living in Victoria at the same time for much of their lives. It would seem reasonable to think that if they had done so then some information would have passed down to us today.

The Nenagh “GUARDIAN” of July 21st. and 30th. 1845 reported extensively on the assassination attempt by John and his accomplice Patrick Brien, and the graphic details of their capture and trial. 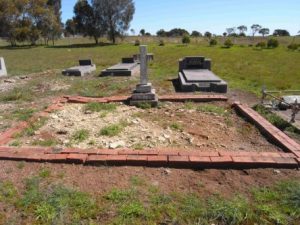