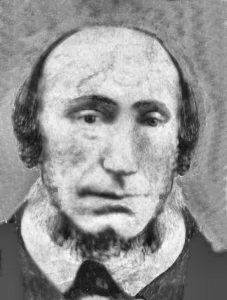 The background stories of this man and his wife Isabella show them to be two of Waanyarra’s most interesting early pioneers.
Edmund was the fourth child of John Robert Thorp and Mary Ann Stevens who were married on January 12th. 1821. He was christened on the 15th. of October 1826, at the Stepney Spitalfields Christ Church in London.
A census shows the family lived in Fashion St. John was a porter of some description.
On the 13th. of June 1836 young Edmund pleaded guilty in the Old Bailey Central Court to having stolen four sovereigns and two half sovereigns from his father.
He could not yet have reached twelve years of age, but was sentenced to seven years transportation!
After sentencing Edmund was confined on the old prison ship hulk the “EURYALLUS”, probably for the whole of the fifteen months until he was placed aboard the convict transport ship “ROYAL SOVEREIGN” which sailed for Van Dieman’s Land on September 7th. 1837, arriving January 9th. 1838.
Perhaps he and his father organised this “robbery” so that the young lad could have a better life in the Antipodes? Maybe Edmund was indeed a bit of a rebel. His convict record shows that he gave the authorities many opportunities to punish him with solitary confinement on bread and water, hard labour and even instances of “stripes” with the lash.

Edmund was given his freedom certificate in 1844.
He died in December 1885 and is buried in the Amherst cemetery where his burial plot is marked by a small bronze plaque erected by his descendants. 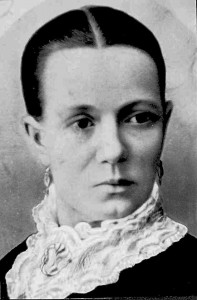 Isabella was born in Falkirk Scotland, circa 1820. From her criminal records we know that she had sisters Mary and Elizabeth, and a brother James. Her mother was Elizabeth.
Isabella was described as a country servant.
She married Alexander Halley on September 3rd. 1841 in the town of Stirling, Parish of Falkirk
On the 21st. of November 1842, Halley had been found guilty of robbery and assault, and exiled for seven years. At this time Isabella and Alexander had one child.
Halley arrived at Corio Geelong aboard the “SIR GEORGE SEYMOUR” in March 1845.
Like Edmund Thorp he had been taught the trade of shoemaking whilst in gaol.
Tried at the Stirling Court of Susticiary on April 21st. 1845 for stealing £86 from cattle dealer John Robinson, an assault and stealing a pair of boots, Isabella was sentenced to seven years transportation, twelve months gaol and twenty days gaol respectively. Her convict record shows she had been twice previously convicted and had “bad connections.”
Isabella arrived in Van Dieman’s Land on June 5th. 1846. She had travelled on the “EMMA EUGENIA”, a thirteen year old ship built at Whitby Yorkshire, the port where James Cook worked as an apprentice shipwright.
Edmund and Isabella must have met soon after her arrival—probably at the expiration of her six months gang probation—as their first child was born circa 1848, another in August 1850 and another in 1852.
They married in Hobart on the 21st. of February 1853. Isabella had been given her Ticket of Leave in November 1849 and her Freedom Certificate in April 1852.
Isabella must have decided to bury her past and forget all about husband Alexander and their child. She described herself as a spinster on her marriage certificate and gave her name as Black. She also knocked a few years off her age stating that she was twenty eight, when she was more likely to have been thirty three. Edmund also lost a couple of years!
Precisely when the family moved to Victoria has not been established, but they had set up home at Fryers Creek by mid 1854 when Amelia was born.
Isabella survived Edmund by almost twenty three years, eventually dying at the Bendigo Asylum in August 1908.
She was buried in an unrecorded location at the White Hills cemetery Bendigo. Her burial there is marked by a small bronze plaque in the memorial area established for the recognition of people buried in unknown locations in the cemetery. 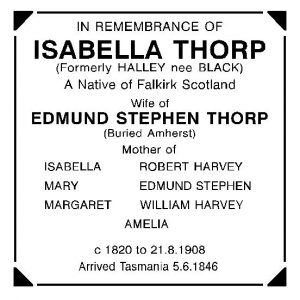 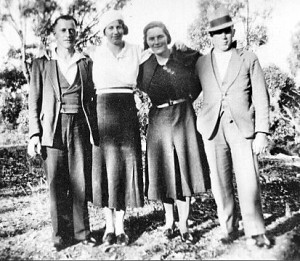 “My first memories of Waanyarra are of a small farm with one cow, one horse, a few hens, a Rosella and a pet Curlew.
My cousin Nancy Joslin, my sister Alison and I would roam the bush at will picking wildflowers and playing in the creek. One time we had stayed out too late and were afraid to go home because we’d be in trouble. We could hear people calling for us and see our parents searching for us, but we hid until they went past, then ran home. We did not know the worry we caused or of the dangers our parents knew were around us, we were happy wandering about picking everlasting daisies and wax flowers in the beautiful bush. I was very young at that time and could not help myself when all was calm and everyone was glad to see us safe, I said ‘Uncle Bert, we hid, we tricked you’. I don’t think I will ever forget that day.
We would often walk along the dry creek bed to visit Grandpa Else. He always made time to read to us from his many bird books. He was very clever at wood carving and taxidermy, using local animals and birds as his subjects. Grandma Else was not a very active or healthy person, but she would knit us socks and toys.
We looked forward to the days Meer Khan the Indian hawker would arrive with his wagon filled with pots and pans, materials for making clothes, knitting wool and all kinds of things. He would give us ribbons or pretty buttons for our new jumpers.
We walked to school, calling at Mrs. Morton’s on the way. Ken Morton would ‘dink’ me to school on his bike, because I was so little and would get tired walking.
I had a pet hen named Henrietta. She was bitten by a snake one day and died. The next day Mum and Dad found the snake curled up in a bag of wheat. They killed the snake and put it on to an ants’ nest.
Dad would take us to the cricket matches played in the district. And I remember one great picnic where we had raspberry drinks and lots of games. It was a happy time that I remember
at Waanyarra.

Posted under Families of Waanyarra and tagged with Black, Halley, Morton, Thorp
Comments (4)

4 Responses to Edmund and Isabella Thorp